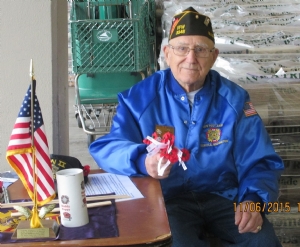 Born 1924, WW II, Army Air Corps. At one time, we used Central Market in Shoreline for our Buddy Poppy events. Back then, Post Quartermaster Thom Fermstad would pick Roscoe up in the morning and Post Commander Carl Christophersen would drive him home (Roscoe was no longer allowed to drive).

At Central Market, Roscoe was literally a "chick magnet". It was very common to find women and teenage girls wanting to take selfies with Roscoe. It was amazing. He was a very inviting, serene and friendly soul.

Roscoe passed away at the Foss Nursing Home in Seattle. Commander Carl "Chris” Christophersen, on one of his visits to see Roscoe, prior to his passing, was motioned, by Roscoe, to come closer. When Commander Christophersen leaned over to hear what Roscoe had to say, he not surprisingly heard Roscoe whisper, "I just want to die”.

End of life is not always glorious.

Blackburn Aurora VFW Post 3348 meets on the 1st Wednesday of the month @ (6:30 pm) at the Acacia Memorial Park at 14951 Bothell Way NE, Shoreline, WA. We serve dinner (no charge) to our members before we hold our regular meeting.
The first Post Commander for Blackburn VFW Post 3348 was Frank Christiansen in 1934. The members of VFW Post 3348 built Blackburn Hall near the corner of NE 125th St & 15th Ave NE in Seattle. In 1972, Aurora VFW Post 2287 merged with us.